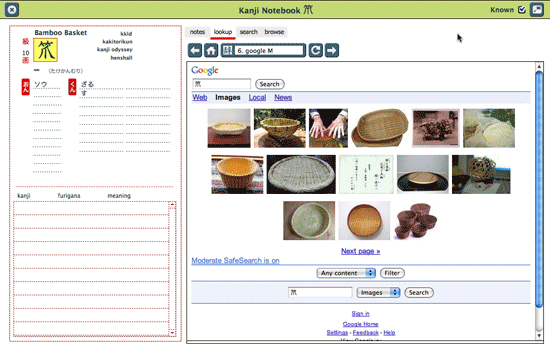 New features in this iteration 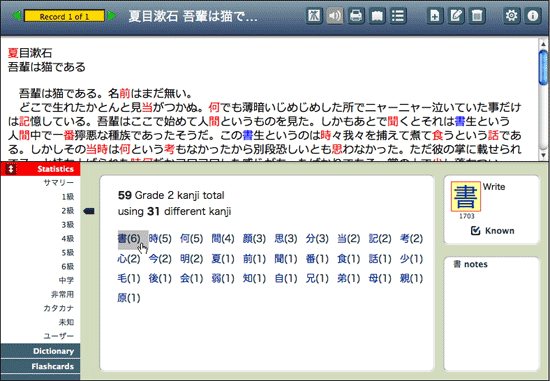 The kanji in the statistics panes can be clicked to get basic information about the kanji, its keyword and the KKLD index. there is also a checkbox to mark it as known.
Kanji Notebook contains more data on 2537 kanji, covering the 2010 Jyouyou, KKLD kanji, and Kanji Odyssey lists. My motivation to build Kanji Notebook was to get a sort of dictionary that showed the data I wanted, and allowed me to add my own notes and importantly change the keyword. The dataset from EDRDG originally started with keywords from Heisig. These are still there as the first word and were driving me crazy. Jim Breen said he was going to clear up these entries way back in 1995 but I still want to scream when I see “old boy” for 君. The keywords from KKLD are better, or sometimes my own keyword. I haven’t included KKLD keywords but there is the option to add them yourself. The KKLD index from EDRDG‘s data is included to help with a look-up. (If you managed to get the iPhone app before it disappeared putting a ~ before the index number allows you to search for it)
The example words are from vocabulary extracted from records in Kanji Sieve. Therefore all vocabulary should be relevant to your interests.

There is automated look-up of Internet dictionaries for a kanji. I find it interesting to search google images to see if I can guess a clear meaning or see how it is being used. You can explore kanji using the browse tab, to get lists by grade, radical, phonetic, kakitorikun screen, or Kanji Odyssey group.
Kakitorikun is a great piece of software for the Nintendo DS. It’s main drawback is it’s completely in Japanese. With Kanji Notebook I can at least easily put an English keyword to kanji on a given screen.
Kanji Odyssey from Coscom is an excellent e-book based on the frequency of use of kanji. It has many examples and recordings of native speech. I recommend it. An added bonus is their completely free update program. Recently I got a new CD from them when they updated for the 2010 Jyouyou. Absolutely free, not even postage costs. That’s a rare service these days.

There is the beginnings of language support for languages other than English. Spanish and French keywords are included. They will be displayed in preference to English when the preferred language is set in preferences. This also controls what language is used to query chuta.jp. However I found that the returns are very short so English is also submitted. wwwjdic will use the preferred language when searching for vocabulary.
Complete translations of the interface are unlikely at the moment however. 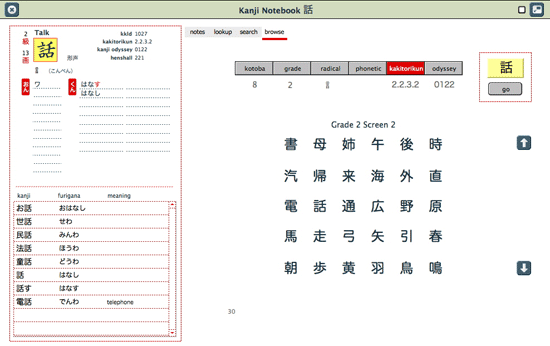 That’s it for now. Next potential release will be January. I really need to spend some more time on documentation! …