Now with added Kanji Sieve. Or rather the way Kanji Sieve has evolved means I’ll be incorporating my Kanji NoteBook project with it.
Unfortunately I think the direction I’m heading in means an awful lot of work on the interface. And a lot of time I don’t have to spare at the moment, but I am working on it and am excited about the way it’s progressing.
The next Kanji Sieve will have multiple records, so you will save you pieces of text for future use. I’m dropping the keywords as completely futile for reading or understanding a text (although useful when first learning a kanji. I have a blog post in progress about this). I’m fairly confident of parsing text automatically to build word lists. This is why I’ve decided it makes sense to incorporate Kanji Notebook with it, if not in v0.3 at least by v0.4.

I will also automatically generate and manage lists for a flashcard system. Primarily as a tab separated text file so you can import to the tool of your choice rather than my trying to re-invent something that others are doing quite well. I have a basic flash card solution but as I have other tools that work better for my purposes I won’t be pursuing it.
I’m thinking about how to aggregate statistics across the database. I would like to rank unknown kanji and words by how frequent they are overall in the pieces of text you store in Kanji Sieve. This would mean needing a listing of known kanji and vocabulary that can be filtered. That might then give an indication of what words are personally more important to learn. Again maybe one for v0.4 when Kanji Notebook is incorporated.

Most of the functions I want are in place. I can make it work for my own needs but I need to make it work for other people before I release it. I also have to think now about how data will transfer across successive future builds.
In the meantime here’s a pic of the NoteBook. 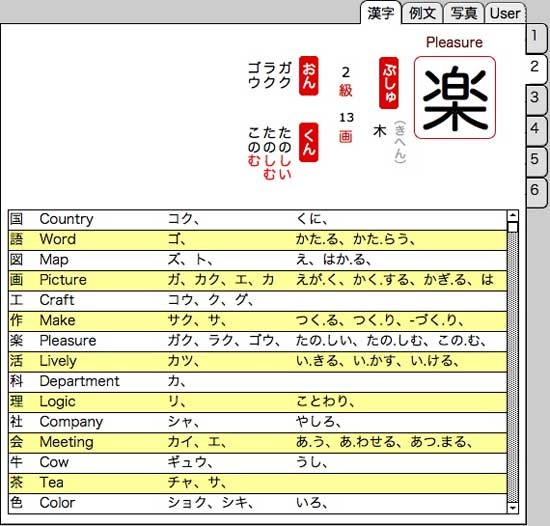