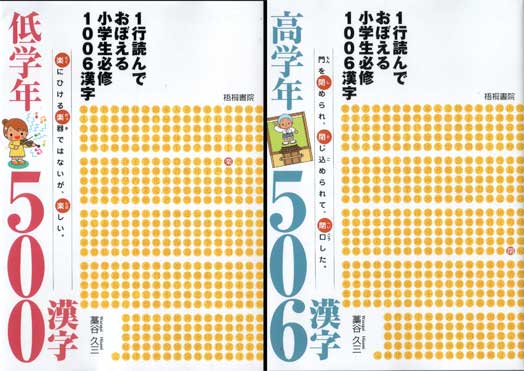 These books have the usual unwieldy titles of so many Japanese books.
1行読んでおぼえる小学生必修1006漢字—低学年500漢字 and 1行読んでおぼえる小学生必修1006漢字—高学年506漢字. The idea behind them is quite simple though. You read one line per kanji to memorise if not all, at least most of its important readings. It’s similar to books written for Japanese second language learners like JLPT3 Kanji by Examples and JLPT2 Kanji by Examples.

The difference here is that the author crams all the readings into a single and maybe quirky sentence rather than the rather dry single use sentences of normal texts. The drawback being that this can use more complex or less common vocabulary and grammar, which is fine for natives but is a bit harder for learners. However as it’s aimed at primary school children, overall the language isn’t difficult.

The books also don’t fully stick to the grade school order. Book 1 is mainly Grades 1 to 3 and Book 2 Grades 4 to 6 but they are presented thematically and so are mixed up. I’d say it’s a bit more of a revision and consolidation tool in this respect. However by grouping them thematically I feel you make more connections and so remember more. Connections are the key. It’s easier to remember a sentence than a string of readings or even a single word. At the very least it should be a good resource for those that like to sentence-mine.

As you can see from the example below, there are five kanji to a page. Five sentences with the target kanji highlighted with a variety of readings. All kanji have furigana. 5 sentences per sitting seems reasonable. Only time will tell what my retention will be like. Maybe I need something like Smart.fm to help me, but while I am transcribing sentences for myself into my kanji notebook project, I don’t think it’s ok to make them public. It’s a very nicely designed book and not too expensive at 1260 円. If you want there’s even pictures to colour in to chart your progress!

The books certainly get rave reviews from parents on Amazon. 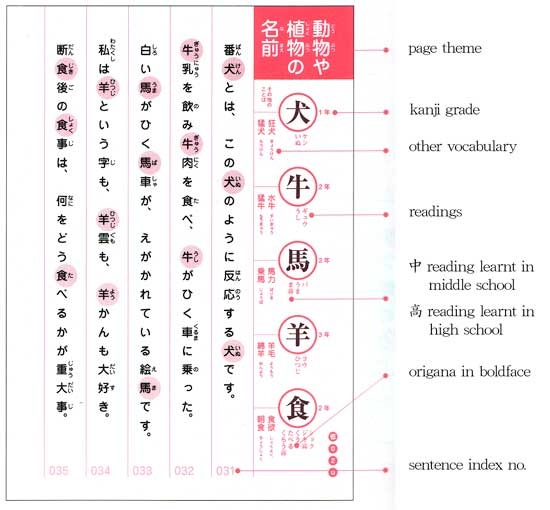