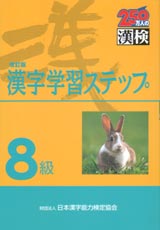 Another book to prepare for the kanken test. This time it is an official book published by the Japan Kanji Aptitude Testing Foundation. It is a textbook for Japanese people, completely in Japanese and requiring a vocabulary beyond that which the kanji might suggest. Maybe it’s for grade school children but I’m certain parts of it are intended for their parents.

It follows the familiar formula of presenting the kanji with a stroke count, radical, onyomi and kunyomi. The readings that are learnt at middle school are marked. There are comprehensive guides to writing the kanji properly. Much more so than would be usual with texts for non-Japanese I think. It’s important to get good habits early on and develop well balanced well written kanji.
There aren’t example sentences but compounds are given for each kanji. I presume these would be the words that would appear on the Kanken test.

The main attractions of the book are the Kanken style tests that are included. In these you give fill in blanks by writing the kanji or it’s reading in short sentences. There are also exercises were you count strokes, or make a kanji from given components. There are also some interesting game like tests that I wouldn’t think would appear on the test. Looking at the pictures accompanying the test scores only a perfect 100 seems acceptable, the rabbit next to the acceptable 80 looks really annoyed and next to 50 positively upset.

Finally you can chart your progress by filling in the date you complete sections and should you feel the need colouring in the wall chart that comes with the book. My schooldays were never like this.