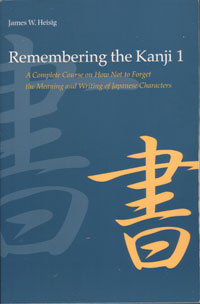 Heisig is the Marmite (or Natto) of Kanji learning. It’s mostly a love it or hate it affair. It also seems to have cultish tones with talk of unbelievers and converts amongst its fans. 溜め息

But because it has so much written about it I decided to give it a try.

Firstly lets be clear what this book promises and doesn’t promise.

The aim of the course is to put an English keyword with a kanji in your memory and give you the ability to write that kanji from memory. It does this with 2042 kanji which is more or less the amount of individual kanji a Japanese student leaves school knowing. It’s a course not on remembering the kanji so much as not forgetting them.

The specific aim is to give you the use of 2000 kanji in a manner similar to having the use of 26 letters of the roman alphabet. This would make it easier to add to your Japanese knowledge because you would be more able to read authentic texts and quickly assimilate new kanji words.

I think ideally you would do this course before knowing any Japanese. This apparently is how Heisig developed the course. In fact after trying Heisig for a few days the less you know about kanji the better.
However I think it’s unlikely for any student to do it this way. Once you decide to learn Japanese it’s unlikely you would delay it for the amount of time needed to learn the kanji. If you were even aware that the system existed.
The time taken is going to vary. But instead of years it is possible to do this in months or indeed weeks if you can do it full time. It seems reasonable to manage 20 new kanji per day, although from what I’ve read people tend to slow down a bit the further they progress.

OK what does Heisig not do?

It does not teach you the Japanese readings
neither On nor Kun. (in book 1) Indeed apart from the kanji themselves there is no Japanese whatsoever in this book. No kana either.
It does not teach compounds.
What you learn are individual kanji and the components that make up those kanji.

How does it achieve it’s goals?

1. It breaks the kanji down in to a systematic order based on their components.
If you examine kanji you will notice there are elements that re-occur. So very simple elements combine to form slightly more complex kanji and those kanji combine to make ever more complex kanji. By being systematic in the order of learning kanji every new kanji uses the knowledge of previously learnt kanji.
Almost as a side benefit of this you learn similar shaped kanji at the same time which makes it easier to remember them and distinguish between them.

2. In perhaps the most debated part of the system. Heisig uses “stories” to place the kanji in your memory. There is nothing new in mnemonics but many people see it as an unnecessary learning overhead.
However Heisig has a very good point here. The usual method of remembering kanji relies on our visual memory, which for most people isn’t very good. Therefore we forget a kanji rather quickly even after an initial success. By remembering a story instead the student uses a different sort of memory and so can recall a kanji accurately and consistently. I found I was doing this myself before I came across Heisig. The 3 women in 姦 easily reminding me of noisy. (surprisingly my Japanese friends didn’t know that the kanji for かしましい was 姦しい、as that particular kanji has many negative meanings when in compounds. but I digress…) The shape of 臭い reminds me of the Stinky Head Cheese Man in a children’s book. I also tended to break down kanji into components I recognised. for instance 語 being 言、五、and 口. Heisig is just being more systematic in using how we remember stuff like this.

3. Lastly the method of practising is by going from English keyword to kanji. In effect remembering how to draw the kanji. This is a little more difficult than reading but much more useful as once you can remember to produce the opposite more passive skill of reading is a cinch.

Why do people dislike it so much?

Indeed, it’s only a book. But like many things those that like it rave about it and those that dislike it tend to hate it.

However I have misgivings.
The total separation of Japanese readings until you’ve mastered writing and understanding an English meaning bothers me a bit. Indeed there seems to be an insistence that it might impeed your successful completion of Heisig. It’s unrealistic to expect that Japanese won’t be attached to a kanji.

The reliance on English keywords rather than concepts also bothers me. Everything I’ve read seems to suggest that you shouldn’t use your first language as a middleman to the second language, that you should combine the foreign word and the concept, not foreign word, english word, concept.
But this is difficult and I’m willing to let it slide.

Heisigs “stories” often annoy the hell out of me, especially the religious overtones. (His writing does as well, I find him dismissive and condescending at times) But I’m free to make up my own mnemonics and hopefully now I’ve seen his big idea I can get past his personality coming through the writing. In fact it’s better to make up your own mnemonics as you’ll remember them better.

There seem to be a lot of “lies to children”, over simplifications, disregard for more conventional aspects of kanji. He also doesn’t really explain the concepts underlying his method nor point out his divergence from the more accepted meanings of the kanji and components. It’s very much a case of “trust in my greater wisdom, grasshopper.”
For now I take a deep breath and remember it’s been done for a specific purpose.

The order seems a bit strange if you know any kanji.
Early on 吾 is introduced as I. Which it is but it’s a bit rare I think and 私 is the most common, probably followed by 俺、僕、and 我. The reason why 吾 is introduced is that it is made of the smaller components 五 and 口.
This seems to often be the case. You are not learning kanji that are immediately useful to you. (In fact you aren’t really learning kanji you are remembering them.)
But as there is a purpose behind it all I let this one slide as well.

While he has an odd insistence on knowing the traditional stroke order and stroke count, the rules governing this are never fully explained that I can see.

I get the feeling that I’ll have to unlearn some of the “lies to children” further down the road.

So Snake oil or Solution?
Probably neither, maybe both. I can see benefits in the system and benefits to the order and groupings of kanji.
If I stick it out I could be in a stronger position. I’ll still have a lot of work to do to actually read Japanese properly and leverage the knowledge into speaking better however. Let’s say it’s a partial solution to my particular problem of wanting to read Japanese. In a similar way to knowing the alphabet won’t actually allow me to read (phonics anyone?) I think that finishing Heisig is but a step on a far longer journey. It isn’t the panacea that some would suggest.

However after trying it for a while I’m finding it quite annoying with a whiff of snakeoil about it. The core ideas are reasonably sound, I’m not sure I like the implementation in the book however. The more I do the more I feel I’ll have to unlearn. Nor does it seem that useful until you can finish it and start the task of knowing how to read them properly in Japanese.

The book is useless as a reference.

The fact that the last text is a strange Latin quote, kind of sums it up for me. Does Heisig actually like and teach this language?

I’ll try to keep an open mind and give it a go.
But you know, I don’t really like Marmite…

In the meantime if you’re curious the first part of the book is available here.
An interesting essay about Heisigs methods is here.
And this is a very good web site to help you using Heisig.

More traditional approaches are JLPT3 Kanji by Examples and Basic Kanji series
Better headwords are in the Kodansha Kanji Learners Dictionary
Let’s Learn Kanji has a lot of detail of how kanji work.
And more accurate etymology in Henshall’s Guide to Remembering Japanese Characters and the Kanji Networks web site.